Laying Up Supplies and Windy Days

We have stocked up on some things like flour and pasta and yeast. Our intent, if necessary, is to sell at cost if folks express need via an online neighborhood network. And I, of course, enjoyed use of the vacuum sealer.

Meanwhile, the winds around here remain crazy as always. Our sloped yard facing west is a huge factor, especially in spring and fall.

Have you ever hunkered down due to severe storm warnings? What extreme weather threats does your home region face?

I have been spending a fair amount of time gardening since the YMCA closed. And as the title suggests, there have been some interesting sightings.

What I first thought to be an American robins nest turned out to be that of house sparrows. Sad to say, they are an invasive species, often overtaking endangered Eastern bluebird nest boxes. I don’t have the heart to destroy the eggs, though, as a dear friend and bluebird enthusiast would recommend. So we’ll see this through and wish them the best.

On another note, earthworms are prolific in our yard. That’s a good thing, a major sign of healthy soil, but as my husband pointed out is also a lure for moles. They have seriously torn up our yard over the last two years. His prophetic statement led to a more startling discovery.

Wheeling our lawn mower onto the driveway yesterday, I saw a dozen or so earthworms writhing on the dry sun-washed concrete. The sight blew my mind. Then I spotted a mole scuttling through its fresh tunnel adjoining our driveway. The worms, apparently, fled (?!) the danger. Flipping them onto a spade using a plant tag, I dropped them onto a raised plot free of mammalian activity. Within a few minutes the creatures had burrowed to (I hope) safety.

Should I destroy those birds’ eggs, despite the fact our area isn’t suitable Eastern bluebird terrain? Is it so different from me sticking poison mole bait into the fresh tunnels? Some moral ethics are a real modern quandary, aren’t they?

My husband finally convinced me that wearing some kind of face covering isn’t silly or self centered and fosters community wellness. Of course, conceding to this new reality didn’t stop me putting a personal spin on it. I still felt a bit weird, of course, but with a somewhat bohemian style hiding shaggy hair and graying roots. ~grin~ My mother gave me this quality felt hat with attached scarf decades ago. When I have worn it, the scarf was usually not needed and tucked up into the crown.


The next little tidbit brought me down a peg, thwarting my aim to be active and upbeat. While loading the dishwasher I cooked a strip of bacon in the microwave. This brand is super thick, so I set the timer for longer than usual. A crackling sound brought me over in a hurry. I turned off the microwave and proceeded to toast a bit of bread. When attempting to retrieve my plate, however, it came out in two pieces. It’s a blessing the remains didn’t fall and shatter, at least, but my mother-in-law helped me pick out this China set for my wedding gift registry about a year before her death. 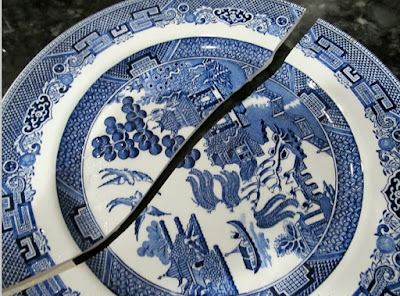 I debated hiding the pieces, not out of embarrassment or anything but because this seemed another little jab from the universe that might sadden my husband. Fortunately he took the mishap well, stating we could always order more plates and mostly curious as to the cause. Don’t tell him I cried a little afterward. ~sigh~ I am trying (in fact, rather successful to the point these tears surprised me).

My aquarium remains a comforting distraction. Admiring minutia led to a little mystery. I have yet to find any aquarium images with this particular growth pattern. I’ll try another search and reduce the amount of time lighting the tank.

This little development almost makes me think of fairies. ~wink~ That whimsical admiration won’t hold if it grows out of control, though, yet the arched shapes (at back) in this video are particularly interesting.


Can you imagine how a microwave safe plate managed to crack? What do you think about the growth in my aquarium?

I’ve been meaning to share some photographs for a while now. Last Sunday I decided to take a walk. But every place I contemplated looked full of people. Driving on instinct, I found myself in a suburb just north of my hometown. This deserted lot centered in a tech industry district caught my attention.

I recognized the plot as serving employees of a cold war era nuclear research center. The Miamisburg Mound history is amazing, if you’re interested, with over fifty years of dedicated scientists contributing toward many areas of manufacture and testing including space exploration.

Again, if you’re interested, there are a slew of pictures better than mine. I like how I stood at the same level after an easier climb from the elevated lot.

I hoped for a better picture from up there, but difficulty seeing the iPod screen and mild vertigo ruined it. ~grin~ But you get the idea. Anyway, there were other decaying signs of past productivity.


Can you believe the facility isolated all its waste water, including from employee restrooms, to test for radioactivity? And that tomato and eggplant seeds sprouted in those particular holding tanks? (ewww…) Would you have felt comfortable working in such conditions, like the neighbor (rest his soul) who told me the above story?

Knowing how much music means to me (and my sanity), my husband gifts me most often with related items. Sometimes I make a specific request. This rechargeable bluetooth speaker was one of those.

Unlike the eBay item pictured above, mine doesn’t have the colorful front panel (not surprising, that cost extra). But the sound is great. Currently plugged in so I can listen to Duran Duran while typing, it can of course be charged up to take outside sans cord.


That back extension you see above is collapsible. Serving as a stabilizing base, the section must be pulled out or the unit powers off. Some folks called that a drawback in product reviews. I never minded until the other day, having made the mistake of tucking it, uncompressed, beneath my arm like a book.

Doesn’t my arm look like I got a weird hickey? Have you ever been ‘bitten’ by technology?