1. Paintings are common enough that there is a name for the artists’ works – cloudscapes.

2. There are a tremendous number of names and classifications. Many of these can occur together in the same stretch of sky.

3. Irisation is a type of rainbow affect from the sun named after Iris, Greek goddess of rainbows.

4. There actually exists a cloud appreciation society. You can find their website here: Cloud Appreciation Society.


5. Morning Glory clouds are rare most places except for the southern part of Northern Australia’s Gulf of Carpentaria. Glider plane pilots are actually attracted to the location to “surf” these cylindrical clouds. Here’s an image of several: 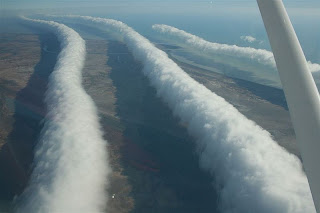 6. A cloud field is the name for a group of them but these can also have their own classification.
7. Cloud Feedback is the name for the interaction between the cloud cover and ground surface air temperatures. The temperature can alter the cloud formations which in turn can change the temperature.
8. Pilots should know the names of clouds and how they pertain to the weather. A friend of mine could always identify them from his private piloting days. It’s a fond memory of him now that he’s passed away.
9. Earth is not alone in having clouds. Any moon or planet with an atmosphere can have them.
10. Liquid methane is thought to make up the clouds of Titan, Saturn’s moon.
11. Fog can be a result of the lowest clouds, called stratus, contacting the ground.
12. Most clouds form in that part of the atmosphere called the troposphere. A few occur as high as the stratosphere and beyond that middle layer to the mesosphere.
13. Iridescence is an uncommon phenomenon caused by uniform water droplets caught by the light of the sun or moon. Here’s a picture: 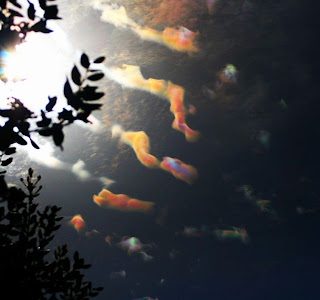 Email ThisBlogThis!Share to TwitterShare to FacebookShare to Pinterest
Labels: Thursday 13

Having recently heard of these decorated trucks, I was happy to have found a good selection of photos on Pink Tentacle. Here are thirteen right off of that website.
﻿
﻿
﻿
﻿ ﻿

My Virtual Sit-Down with Ally Blue

Come read my interview with this talented author! 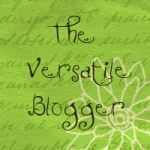 I was just awarded the Versatile Blogger Award by the talented Janice Seagraves! Thank you, dear. It means a lot that you would think of me.

If you haven't been there, dear reader, please visit her website: Janice's Home

So, here are seven things about me:
1. I am studying Japanese and finding that I still know only a fraction of the beautiful language.
2. My favorite color is purple but it really doesn't look that good on me.
3. A dream of mine is to open a ryokan in Japan. I imagine a bed and breakfast welcoming tourists from abroad.
4. As an asthmatic, my biggest trigger used to be cats. Now I have more than one! Modern medication is wonderful.
5. A Catherine Noon is the author who got me started on blogging. I'm still influenced every day by her attitude and enthusiasm.
6. I'm part of two group blogs besides two of my own.
7. I have a pet betta fish virtually alone in a ten gallon aquarium because a tiny tank just didn't seem right.

My list of award recipients follows. Please check them out!

A Bit of Sunshine

Email ThisBlogThis!Share to TwitterShare to FacebookShare to Pinterest
Labels: Joys and Blessings, Promotion

1. No more sweating. I always find it easier to get warm than cool.