A Review of “Poisoned by the Pier” by Ellen Jacobson 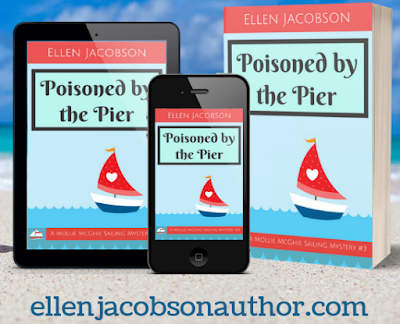 Amateur sleuth Mollie McGhie is back! This third cozy mystery installment by Ellen Jacobson delighted me yet again. I thank her for a free e-book in exchange for a fair and honest review.

While our plucky Mollie stumbles upon another dead body, she continues trying the patience of Coconut Cove’s Chief of Police with her intrepid investigations. Their interactions might be my favorite among all the quirky characters. And I appreciated how his persona gained a new dimension.

Add in the feline antics of Mrs. Moto, Mollie’s adoring husband Scooter with his little eccentricities, plus all her other inventive personalities from the first two books, and it’s an amusing read.

Ms. Jacobson draws from some personal nautical experiences I’ve read on her blog, The Cynical Sailor &His Salty Sidekick. Knowing this, as well as that she injects her brilliant sense of humor into Mollie’s personality, multiplies the fun. Household chores got neglected the day I started reading, and bedtime that night was delayed, as well.

It’s not often contemporary stories hold my attention to that degree, supplanting my own writing time. And Ms. Jacobson’s are among the best edited one can find today, with nary a typographical error. That is always appreciated.

You, dear reader, can find her book on Amazon, Barnes and Noble, as well as most anywhere quality titles are sold.

What would you do if a significant other gifted you a boat as an anniversary present?

The title is a terrible pun, I know. You’ll understand how it fits in a moment.

First off, staffers working for his physician gave my husband the nickname “Mr. Pickles” due to all the jarred dills he has taken since last season’s boon. I, of course, thought immediately of “Dr. Jekyll and Mr. Hyde”.

Though the mythical Hyde is the insane one, and my husband the more emotionally stable partner, I suggested calling ourselves “Mr. Pickles and Dr. Gherkin”. Amused, he embraced this occasional joke.

He went grocery shopping alone, bless his heart, and decided to peruse the greeting card aisle. We have long followed a feline theme for all holidays, so he sought a change. He went so far as to look outside the anniversary section, which he found limited thanks to the United States celebrating Fathers today.

No doubt you can imagine where this is going…

He indeed discovered one featuring a pickle. And it's hilarious inside and out.

The inside surprised me again. This dude is so cute...

Even the back of the card is cheeky. I had to point this out to my SO.

Do you think I should follow this new trend, perhaps seek a general food theme to broaden the opportunities?

Having Your Cake and Eating it, Too

Driving about running errands the other day, I listened with my husband to  a podcast he discovered. We enjoyed the banter between those hosts and laughed an inordinate amount over the thirty plus minutes of hilarity.

One story stood out. The mother of a young lady went to pick up the graduation cake arranged with their local Walmart. For some reason, that order was proclaimed lost.

Employees offered a much discounted, ready replacement. Confection decorated, they sent the contented lady on her way.

Fast forward to the party and cutting of said cake. The dessert turned out to be a sort of floor sample, if you will, the graduate slicing into a Styrofoam slab!

I would have found the mix-up hilarious.

Not these prima donnas. Mother and daughter burst into tears, the party proclaimed a disaster.

Now, let me tell you that promised story about my wedding day.

The historical local home turned bed and breakfast sported a lovely, deep and wide stone porch. That was where I arranged an intimate catered reception for attendees. I instructed my kind, elderly baker to set up her creation on the designated table outside.

She feared ants would be a problem and instead delivered our cake to the B&B owners’ kitchen. My well meaning father offered to carry the cake out following the ceremony. He had to traverse a long way through the entire large first floor, a daunting task. Our dear friend Phoenix thought it would be funny to jump out in front of him as a surprise.

Phoenix startled him to the point he almost dropped the cake. It got smashed against his tuxedo sleeve and the nearby wall. My two dear sisters-in-law acted fast. One thought to empty some of my homemade satin roses of the birdseed meant for well wishers to shower us newlyweds. Together, the women camouflaged the worst damage.

If I’d spoken to the cake maker, I would have pleaded that she discount the unfounded fear of insect invasion. We could have stationed one of our nieces or nephews to keep watch, for that matter. Oh, well.

My new mother-in-law advised her youngest son not to inform his new wife of the minor disaster before our portraits were taken. And nobody fingered the culprit until decades later. They should have known I would not be angry. Life is too short.

And it’s a funny memory now if a bit disappointing on the day.

I’m happy to report our photographer thought to capture a photo inside that sunny back room. The image turned out better than hoped, cluttered countertops somehow kept in shadow. Good thing, too, because my husband never got a look at the cake until after the ceremony.

That photographer, by the way, was the dear man who I announced as having been recently hospitalized. I’m delighted to report he is now rehabilitating at home after diagnosis of a minor stroke.

Would you cry over a Styrofoam cake? And how did that woman not realize it didn’t weigh enough to be edible?

My husband and I often joke that I live the life of a housecat. The fact Jezebel has become almost a Voodoo doll for my existence takes this to the next level.

Case in point, she developed that aforementioned limp in her right front leg about the same time my right shoulder became painful. Fortunately, we both recovered. She must have landed wrong following a jump. While my injury is a mystery, a doctor’s recommended painkiller and exercise regimens healed me.

Meanwhile, I also related a false cancer scare caused by the well meaning vet technician who left a message regarding her blood test results. Guess what happened last week following my latest mammogram?

Yup. I got a surprise, dreaded call to come back for further examination.

A complicated cyst was diagnosed during my follow-up ultrasound. Unsurprised, the doctor advised more scans in six months just to make certain the abnormality is stable.

That last bit of news left me much calmer. Things are looking up! Heck, last week we got our initial shingles vaccinations after being on the waiting list for almost a year. We’ll get the secondary booster sometime within the next six months.

My arm still hurts and itches a bit around the injection sight, but that’s preferable to the agonizing condition it’s meant to prevent. The Christian reverend I engaged to perform our 1997 wedding suffered a shingles outbreak before our big day. Fortunately, that considerate man got us into contact with a surrogate.

That fellow showed up late to the B&B I booked, late enough to make some folks nervous, but did a fine job. For me, it just meant we’d enjoy yet another engagement party before eloping.  To my groom’s chagrin, my promise of an intimate service didn’t pan out like he expected. Both our mother’s hosted large pre-parties in Northeast Ohio and the wedding guest list doubled over what he expected. How could I have turned away friends’ and coworkers’ spouses?

As for the big day, those memories remain the favorite out of all my five decades. Nothing upset me, not even when my father smashed my three tiered cake against the wall. I’ll save that story for another post. The tell fits nicely with a strange bit of recent news.

Do you know the tradition of freezing a portion of wedding cake for the couple to share on their first anniversary? How about washing it down with sparkling wine for breakfast?

We did. Heh… What yummy decadence.

Time has really gotten away from me. I find myself missing favorite bloggers’ posts for days and am shocked how long since I put up something myself. It seemed a good day to rectify that.

In short, things are looking up. Strawberry plants I didn’t expect to survive winter are producing some sweet fruits. And insects are leaving many of the berries alone! Today I enjoyed a particularly big, juicy one. Given the choice, my dear husband took the two smaller ones.

Besides that little consideration, he has been super throughout my difficulties with anxiety.

We went out today to do a little gardening together. Lettuce planted in our square Earth Box is doing great!


Most every trial turned out at least okay. We adore our 2017 Volt, my cat Jezebel has stopped limping, and Tilly acts half her age despite a frail appearance. It seems her infection has at long last been defeated. This bright eyed girl is jumping into bed again! Jezzy got sort of supplanted as a result, but receives attention when she wants.
My one major worry regards my best friend’s father. ‘Dad’, as I’ve called him longer than I can recall, is in hospital following a stroke. Thank heaven, he is stable and hasn’t displayed any serious side effects from what medical professionals are calling a minor brain bleed. The family is awaiting further test results to make a plan for his future.

I feel for them as they keep encountering delays. At the same time, however, I consider it a good sign that other patients are in more urgent need of equipment. Prayers for Dale in Northeast Ohio are appreciated.

On the bright side, my flowering cactus are especially beautiful. We should get lots more into mid summer.


Also, another friend delighted my husband and me by finding this old photograph of us. He used to whirl me around the dance floor in a Texas two-step back in the day.
Do you grow any of your own fruits and vegetables? If so, what kinds of crop(s) do you grow?