Well, following the prior post on my food fanatic husband's penchant for cooking experimentation, here is our verdict on the sous vide cooking method for a whole turkey.

That cooked bird, whose sacrifice we greatly appreciate, turned out delicious. My clever husband chose well. What we cannot devour in a few days will be frozen for future consumption.

In the sealed cooking bag he opted to use chicken broth in place of the suggested water. I concurred, and later portioned the resulting stock in numerous freezer bags. In future, we likewise agree, some sodium free broth would be preferable as the resulting stove top corn bread stuffing came out extra salty.

(Don’t judge; I like the classic brand from my childhood… Heh…)

Also, I may note, the prepared stuffing mix is available in lower sodium. Anyway, twelve hours in a 150F degree water bath followed by a 450F degree oven roasting for thirty minutes resulted in an overall tender, fall apart juicy texture with a delectable outer crispness.

I have since cleared the kitchen of entanglements and obstacles. The equipment, meanwhile, needs cleaned before storage and now our refrigerator is making strange noises.

Are you ready for the holidays or, like me, do you wish 2019 would end already?

I apologize for the Shakespearian pun. My will is too weak to resist. At any rate my husband discovered sous vide (French for ‘under vacuum’), a slow and low temperature process a year or so ago.

We’ve enjoyed many meats, steak and chicken and fish, all prepared in a small, dedicated tub of heated water. A follow-on oven roasting or stove-top browning often completes the dishes. Today we tried something different, an entire turkey.

This required a bigger container for the heated water. Ironically, he came up with the brilliant idea of using our propane turkey fryer equipment.
My only fear is getting tangled in cords or something. The entire process is supposed to take twenty-four hours. And we started around 3pm or so.

Have you heard of sous vide? Would you try it?

A Lesson for the Electronic Age

Well, that didn’t quite work out as planned.

The bills sent by our health network have been delivered straight into both mine and my husband’s accounts spam folders. ?!? This is how I ended up getting sent to a collection agency over charges we never saw.

I discovered the circumstance by accident, having tagged an unsolicited email as spam and opening that folder for verification. So now we know. Since this discovery, we have paid over three thousand dollars (US) for 2019 services.

Prior billing notifications dropped out of the spam folder, which is annoying. Worse, the billing summary on our network portal web page shows zero account information on file. ??? It's frustrating, for sure.

Do you ever check your spam email folder? Can you believe the billing department never called about the issue first?

I have been busy falling behind writing toward my National Novel Writing Month project, and thus have been a bit absent here. I’m experimenting with this Comic Sans font that some writers swear boosts their output. Not sure it’s working because I’m almost two full days’ word count behind, but real life issues have been dragging me down this November.

Meanwhile, I wanted to share something that a local friend posted on our NaNoWriMo FB page. Truer words could not be spoken (though I thought the last word was ‘bat’, which I find even funnier… Heh…). 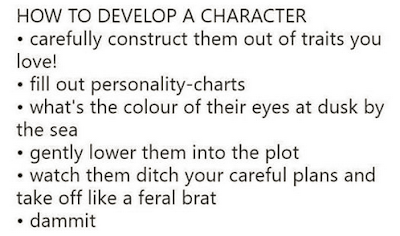 Doesn’t the best comedy have a ring of truth? And what do you think of this font for blogging? Be well!

Mixed News & Joys, Including the Mighty Mites within a Determined Garden

Oh, well. We can only hope next year is better. In addition, end of season surprises delighted me. First, a purple coneflower:

And here is another example. Short as I am, I have never seen such perseverance!

Meanwhile, our dryer vent provided a good nesting spot for some rodent. So that issue is fixed. Though we could have saved money with a DIY investigation, my husband considers the professional cleaning a good investment. The heavy duty machines are worth preserving, for sure.

In an unrelated question, have you ever gotten collection agency notification on a medical bill you never received?

Decking the Hall – Spin Cycle for the Win

The other day I discovered our clothes dryer working improperly. As some idiot home builder put the thing on an interior wall, the tubing connected to it runs up that wall, across the ceiling, then to the window vent. I figured lint had built up.

Taking inspiration from Strayer, I looked up on Youtube how one might go about finding and removing a potential clog. Well, my husband decided to go with professionals. We expect a technician to visit next Saturday morning.

My fingers are crossed that this old workhorse doesn’t require expensive repairs.

Meanwhile, I discovered something great. As long as its twin, our heavy duty washing machine continues operating well, I could live just fine without an electric dryer. In fact, I wanted to freshen my top sheet today and the spin cycle did such a good job it was ready for the bed within an hour and a half.

I just need a proper clothesline. See below... ~grin~ What can I say? Improvisation is my forte.

Have you ever seen an old fashioned wringer washer in use?

Hearing protection is very important to me. Loud rock concerts are just one source I’ve guarded against for decades. Since fearing reuse to be the source of an inner ear infection my husband suffered earlier this year, I stopped using our preferred foam plugs more than once.

In thoughtful response he ordered a bulk package of twenty five sets and opened the delivered package this afternoon. To our surprise they are not the typical orange. Dear Pam of Life Through My Eyes, I thought of your adoration of purple. 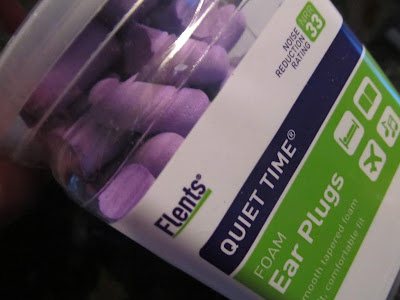 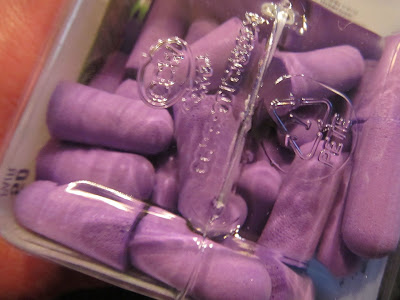 Do you have a use for ear plugs and recommend a type?