The Plot Thickens, a Christmas Memory, and How Not to Hoe 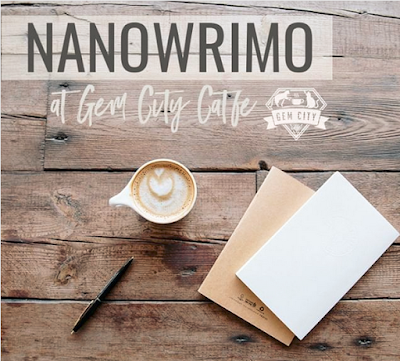 I used to wake with story ideas first thing most mornings. While writing is a tremendous joy, I hadn’t realized how much I missed that wakeful muse until its return two nights in a row.

Friday’s was at 2:30 in the morning, all but sitting me up in bed and popping open my eyes. But I won’t complain. It’s more a joy, even, because I later remembered the idea that woke me while having been too groggy to make note in the darkness.

This morning I plan to start my NaNoWriMo project’s opening over again following a new and, I think, more interesting scene which should meld fine into what follows. I’m excited.

But first, let me tell you I wrote Saturday’s NaNo quota in near record time. As a result, I decided to meet with other participants upstairs at the Gem City Catfé. It’s a neat place new to me. I hope to bring my husband and pay to play with their shelter kitties (bringing one or two home as a result would be nice).

In the ninety minutes or so spent there I got to visit with a close friend and still accumulated five hundred new words. The owners have gone so far as to put a sign in their window welcoming NaNoWriMo writers.

That was a nice touch.

Not so nice was the excitement encountered before my second to last freeway exit. I was about to leave I-75 and head east on Route 35 when the pickup truck two vehicles ahead of me lost something long and thin.

Did you guess it was a garden hoe?

They must have been landscapers. I hope the perpetrator saw it happen and secures all tools better in future. It’s hard to say (and here’s my holiday memory). My older brother once lost a Christmas tree off the bed of his truck and didn’t notice. He pulled over upon realizing Mom and I were no longer following him down that country road.

Then it occurred to him he shouldn’t have been able to see out the truck’s back window. Heh… Good times.

Anyway, that hoe tumbled end over end through the air. The car ahead of me almost drove off the freeway. I’d like to congratulate him or her for quick reflexes and skillful handling. Thank heaven that stretch has a wide shoulder and nobody was tailgating for a change. My swerve was much less dramatic, the hoe having come to a rest just left of center in my lane.

I can only hope nobody got injured. No northbound traffic backup on my way home indicated a major accident, at least.

Have you ever drank matcha?

PS The Catfé was out of chai (!) and so I tried this green tea powder suspended in milk. I cannot recommend the beverage, whose aftertaste I found cloying, like muddy grass. Ugh…