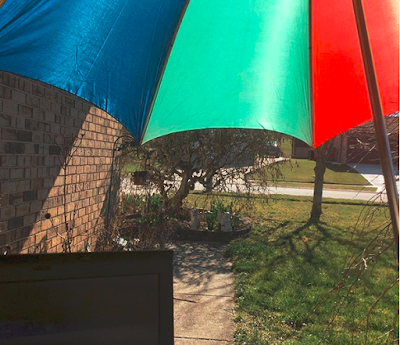 It’s hard to believe June is halfway over. Those more social than me continue commemorating the 1969 Stonewall riots in Manhattan and boosting awareness of LGBTQIA+ issues. I am still praying all attendees stay safe, have fun, and make a positive impact. This world needs to be safer and more loving toward everyone.

I hope you enjoy his tension and will check out more writers sharing on the Rainbow Snippets Facebook page. Have a great weekend!

Like that little boy in “The Shining”, only much faster, he retraced his steps in reverse making the barest contact with the carpet out of sheer panic. In his haste he didn’t quite engage the latch, but the door to the body dump stayed shut as he backpedaled to the sewing room.

Inside, recognizing the fact he had maybe thirty seconds before discovery, Nickolas cursed himself for not having converted the futon into a bed. Whipping off his shirt, he kicked the pillow toward the armrest and yanked the afghan around his shoulders.

Rolling himself prostrate within the blanket like a burrito, he channeled Danny’s crazed father at the Overlook Hotel, imitating those horrifying bellows the best he could. Andy’s voice reached him from down the hall.

How would you react, cornered by such a frightening discovery?